Since its formation in 1968, Cwmni Dawns Werin Caerdydd has been celebrating and performing Welsh folk dances, traditions and music. 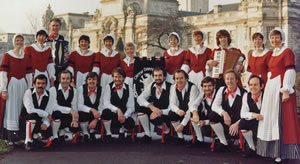 We've been ambassadors for Wales and Welsh culture, entertaining and educating audiences both home and abroad, and have won the main prize for folk dancing at the National Eisteddfod on numerous occasions, most recently in 2012.

We've toured the world and performed in such countries as Ireland, The Netherlands, Germany, Brittany, Belgium, Spain and even further afield in the USA, Japan and the Ukraine. In 1983 the Company's contribution to European folk culture was recognised when it was awarded the prestigious Europa Prize, the only group in Wales to have achieved this honour. 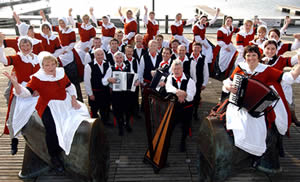 The Company has over 40 members and meet on a weekly basis to practice and socialise, predominantly through the Welsh language. We pride ourselves on showing a living, varied and developing tradition. In addition to preserving and performing dances and rituals that are hundreds of years old, we interpret and compose new dances.

Since 1977 the Company has organised an annual folk-dance festival — Gŵyl Ifan — in our home city of Cardiff. As well as dancers from all over Wales there are foreign teams who perform their own folk traditions. Many of these teams are friends we've made over the many years that we've been touring the world.