While dancing is the company’s main performance, we’ve revived and interpreted many Welsh folk traditions including the Mari Lwyd, Hunting the Wren, Rappers and The Mummers’ play.

Centuries ago folk dancing was popular throughout Wales. However, during the 18th and 19th centuries, due to Nonconformist influence, dancing was considered sinful and fell out of favour.

In the 1920s there was a renewed interest in folk dancing as a result of the efforts of the Urdd (Welsh League of Youth). In 1949 the Welsh Folk Dance Society was formed to promote and revive the old dances and create new ones.

Today, through competition and festivals, folk dancing has developed in to a lively and colourful part of Welsh culture.

The costumes worn by folk dancers are a very important element in folk dancing. We have made good use of the costume collection and the advice of the staff at the Museum of Welsh Life, St Fagans. 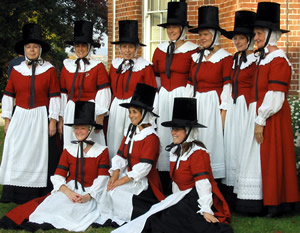 Our main costume is based on clothes worn by the “working class” people of South Wales during the early 19th century.

The women’s costume consists of a “betgwn” (bedgown) and a “pais” (skirt) made of traditional Welsh flannel. A white blouse with a shawl effect collar, a white apron and bonnet complete the outfit.

The tall Welsh hat is maybe the most well known article of Welsh folk costume. We have had some hats made based on an 1850s example seen at the Museum of Welsh Life’s collection. 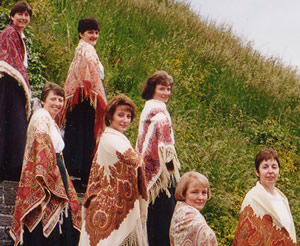 Other costumes are used for specific dances for example we have a collection of original Welsh shawls from the 19th century which are used in the court dance “Meillionnen”.

Suitable music is an essential element of folk dancing, and we have a wealth of traditional folk melodies in Wales. Normally a specific tune is played for each dance and sometimes a second air or countermelody is added as a variation to the music. We have a large selection of melodies within our repertoire which has been carefully assembled for the dances.

As well as melodies from old music collections and manuscripts we also use new melodies composed specifically for more recent dances. These new tunes are based on traditional Welsh folk music. 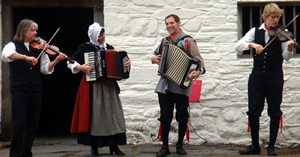 Our band of experienced musicians have the flair to create the ambiance required for the dance be it a court, fair or other form of dance.

Our band is made up of a variety of instaments including, fiddle, flute, doublebass, accordian, tabard and the Welsh triple harp. The use of the latter was promoted in the court dances at Llanofer in Gwent by Augusta Hall, Lady Llanofer, in the 19th century.

Quite often our programmes include musical items which add variety to the programme and give the dancers a rest.

The Mari Lwyd consists of a horse’s skull on a pole covered with a brightly decorated sheet. A group of men carry the Mari around local houses and taverns hoping to gain entry to join New Year’s celebrations through song.

After hunting the Wren men would place the bird in to a little wooden house that was brightly decorated with ribbons which was then carried from house to house. To receive a feather plucked from the Wren was considered very lucky.

This is a sword dance borrowed from the North of England. The rapper was an instrument used for scraping the coal dust from backs of pit ponies and is an example of an agricultural tool being adapted for industrial purposes. They were used on the farms in Wales until recently. 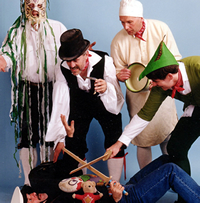 The play was collected at the village of Llantwit Major in the Vale of Glamorgan. It has been adapted somewhat over the years and it has been part of the vale tradition for many centuries.